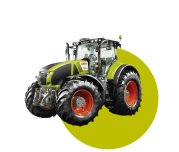 Reesink Farming & Handling serves agricultural businesses in the Netherlands and Kazakhstan with various brands. CLAAS is one of the leading producers of self-propelled harvesting machines and is sold both in the Netherlands and in Kazakhstan. The programme also includes tractors, system tractors, hay-making machines, self-loading trailers, presses, press and wrap combines and telescopic loaders. Amazone supplies products intended for purposes ranging from soil preparation to preparation for harvest (including soil-furrowing machines, broadcast spreaders, sprayers and seeders) for the Netherlands. KAWECO is a manufacturer of agricultural machines, specializing in slurry tankers, slurry injectors and silage wagons.

In Kazakhstan, the product range is supplemented by the agricultural machines of Horsch, Mac Don, Morris and Summers.

Tingley’s is the largest CLAAS dealer in North America and is active in Saskatchewan and Alberta. With a total of three locations, two in Alberta (Lloydminster and Vegreville) and one in Saskatchewan (North Battleford), it serves a large area. Its activities focus mainly on large-scale grain farming, but dairy and other livestock farmers and contractors in the earth-moving sector and in the oil industry are among Tingley’s customers as well. Besides CLAAS, Tingley’s range comprises brands such as JCB, HORSCH, ELMER’S, PENTA, MACDON and others. Tingley’s has a total of 60 employees who serve the area from its three locations.