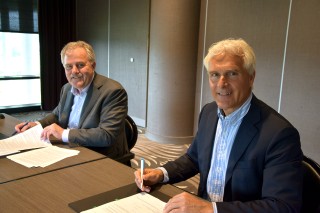 With the final takeover of the shares of Mechanisatie Van Bergen and Bergrent B.V. by Royal Reesink B.V., Van Bergen Tuin & Parkmachines has officially become part of the Reesink Turfcare division.

Van Bergen Tuin & Parkmachines is established in Haren (Gr) and has been a successful deal er company for Royal Reesink subsidiaries Jean Heybroek and Stierman De Leeuw for many years. The company has been a household name for over 60 years in the garden and park machinery sector with strong brands such as Toro, Holder, Kubota, Husqvarna, Stihl , EGO Power+ and Eliet.